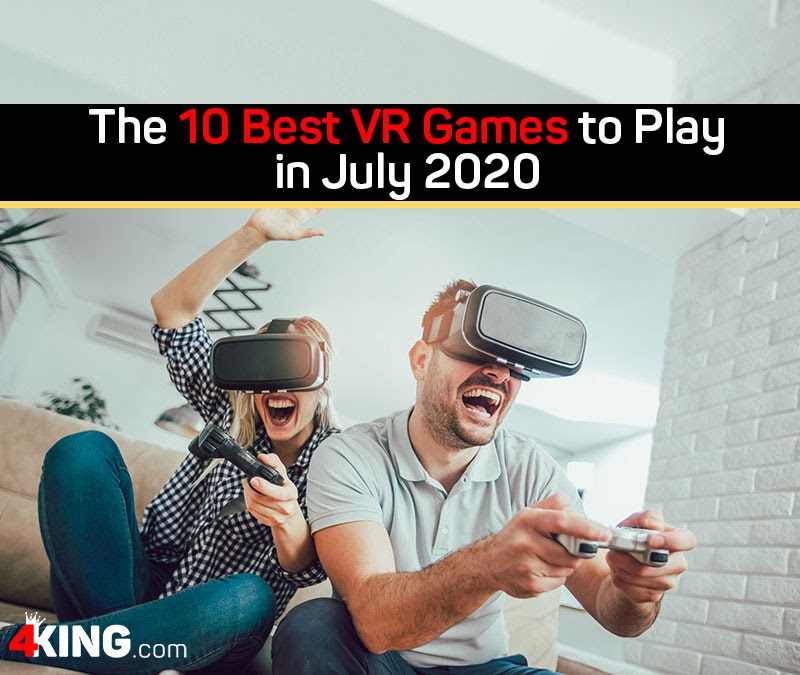 If you’re looking for the 10 best VR games to play in July 2020, you’re in the right place. Virtual reality as a gaming platform is home to some of the best, most immersive experiences that the industry has to offer. VR is no longer the stuff of Sci-Fi – it’s accessible in your home, at all times, with a headset to suit every budget. Let’s take a look at the top VR games you should be playing, in July 2020 and the future.

This game is only a demo at the moment, but it’s an incredible exhilarating way to access the Avengers universe. You’ll play as Iron Man, Tony Stark, and make your way around the environment in a tutorial mission, story mission, and extra challenges that test your flying and fighting skills.

You’ll be flying using Stark’s own HUD, navigating your way through to storyline and overcoming obstacles along the way.

This story takes place in the world of Half-Life. You’ll be fighting as Alyx Vance, rather than Gordon Freeman as in the earlier installments. You’ll work your way through City 17, having shootouts with Combine soldiers and alien foes and solving puzzles in the VR environment.

This game is long awaited, and it’s received astounding reviews since its release.

This famous space exploration game can now be played through the comfort of your VR headset. You’ll be in charge of making your way through new worlds, discovering and marveling at the vastness of space through your ship’s cockpit. The VR environment is absolutely enormous, so you’ll literally never run out of new places to explore.

Hunt for resources to improve on your ship’s build, and travel further and further into the universe on your quest.

Beat Saber is a kinetic rhythm game, which allows the player to work up a sweat while slashing color-coded blocks to the music’s beat. You’ll use two motion controllers to swipe vertically through the air, racking up points as you go. This is a stellar way to get some exercise in, and have a lot of fun as you go.

The Elders Scrolls V is a much-loved open-world epic, now in VR edition. Skyrim VR gives players an in-depth look at Tamriel, the world of the game, as they move through it and complete missions as they go. The game features fully tracked motion control for both your left and right hand, so it’s fully immersive.

Doom VFR is a VR adaptation of Doom, a combat game that’s best suited to a standing-room setup. The game often requires you to raise and lower your profile, and move around to tackle enemies coming from various different locations. The game uses a controller to help you position yourself in the world.

Rec Room is a departure from the usual combat VR games. In fact, it’s ideal for relaxation and stress relief. You’ll interact with a variety of objects and minigames, and interact with other people on mic. It’s a social experience too!

In Star Trek: Bridge Crew, you’ll join the Starfleet in four main roles: the Captain, who works through objectives and gives orders, a Tactical Officer who manages the various sensors and weapons on board, the Helm Officer who navigates the ship, and the Engineer who takes care of the ship’s structure. You’ll be communicating with your crewmates constantly, so this is an interactive and immersive game from start to finish.

Archangel: Hellfire is a mechanical shooter, single-player story. The game places you in a cockpit of an on-rails mechanical shooter experience. It’s best played while seated, as you control the two arms and weapons attached to the vehicle. You’ll fight waves of oncoming enemies, and make your way through the VR environment.

Number one of the list of the 10 best VR games to play in July 2020 is Fallout 4. Fallout 4 positions you in a post-apocalyptic version of the world, just outside Boston. You’ll fight against various people, monsters, and machines, as you attempt to find your missing family member. You can walk around freely in the Fallout 4 world, or use your controls to navigate.

The Top 10 VR games to play in July 2020 are all a real treat. From fighting monsters, to exploring the universe, or kicking about in a sandpit, there is quite literally something for everyone. The VR gaming world has exploded in the last few years, so get yourself in on it and enjoy the ride.