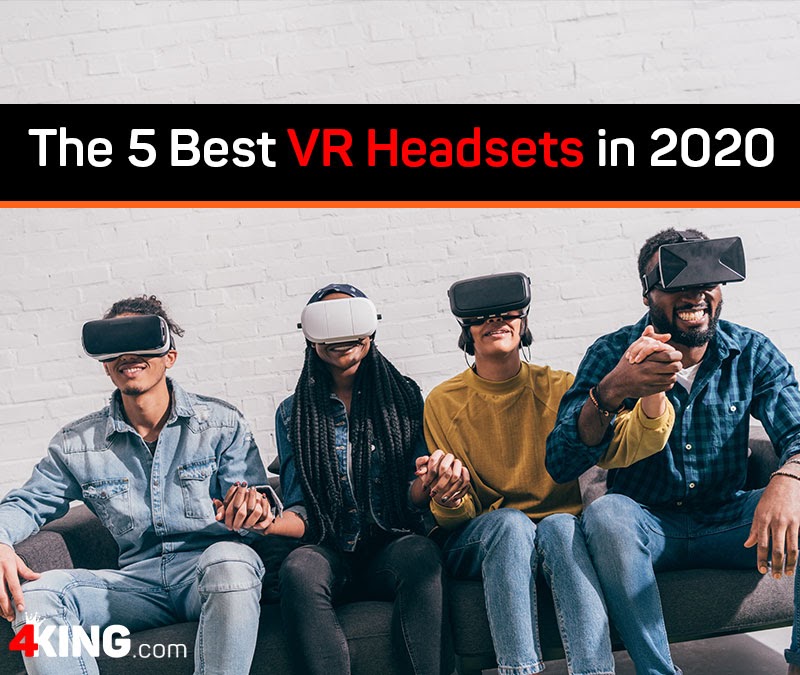 Looking to level up your gaming and invest in a VR headset? There’s a lot to get your head around, from resolution, view-scale, and function, not to mention pricing. Join us as we explore the 5 best VR headsets in 2020 and help pair you up with your ideal solution. It’s about time you spoil yourself!

With the release of Valve’s Half-Life: Alyx in 2020, VR experienced a mild revival with Google searches seeing a substantial increase. Not to mention the world wide pandemic that has everyone sitting at home, of course there was that too. Whether you’re looking for a Playstation, PC, or smartphone VR headset, let’s dive in and see what’s your best match.

Here is an overview of our 5 best VR headsets in 2020, see more details below:

Kicking off our list of the 5 best VR headsets in 2020 is the Merge VR. Compatible with a wide variety of smartphones, Merge VR offers a reasonably priced VR headset for players looking to get a taste of virtual reality through their phones. The Merge VR headset also offers a range of educational and entertaining experiences, so players can get the experience without forking out the big bucks.

Allowing space for (prescription) glasses, the Merge VR headset provides 3 degrees of freedom and a decent field of view, as well as anti-fog channels. Resolution is obviously dependent on the smartphone you’ll be using. This is an entry level VR headset, and a perfect (and very reasonable) way to get a taste of the VR experience.

Retailing at just $50, this headset is a steal for newbies. Just make sure your smartphone is compatible!

Coming in as the best VR headset for PC is the Oculus Rift S, due to its PC compatibility and all round good functionality. This is one of the latest releases from Oculus, and a more streamlined and better quality version of the Rift. Players can expect self-contained room tracking via five built in cameras and, really good controllers, and a higher-resolution display. The Rift S can also boost its visuals with a PC graphics card.

The headset retails for around $399 on the Oculus site and includes everything you need to immediately get started: Oculus Rift S headset, two touch controllers, headset cable, video output, and AA batteries. Easy to set up and only requiring one cable, the headset requires no extra hardware. The headset itself is comfortable, not too bulky or heavy, and offers a resolution of 2560 x 1440 – perfect for spotting finer details and smaller text.

Also worth mentioning is Oculus’ excellent collection of apps and games. Plug and play with this bad boy.

While not necessarily the most high-tech VR headset out there – it still works perfectly and is certainly worth it for the games! PlayStation offers an extensive range of top notch games. It also retails for a slightly lower price, more on that later, and is one of the better looking headsets out there. Offering a 1,080 x 1,200 (per eye) resolution, the PSVR headset can only handle 180 degrees of rotational movement, but still manages to offer an impressive immersive experience.

Great for the excellent game variety and attractive display, the PSVR headset might be a little less advanced than your Oculus or Vale headsets, but still packs a punch and will keep you entertained for hours.

Coming in at a much heavier price point, the Valve’s Index certainly proves its worth with a much more advanced experience. Operating at 144Hz (compared to 90Hz of most other headsets), the Valve’s Index has a wider field of view, reduced visual coronas, amazing futuristic “knuckle” controllers, and an impressive high-resolution display. With a spectacular resolution of 2,880 x 1,600 and Valve Lighthouse tracking sensors (the most accurate tracking solution in VR to date), players can expand their roomscale playspace to as much as 100m squared and see all the detail.

Right, the price. Coming in at $1000, the Valve’s Index VR headset is not going to be an option for everyone. Exorbitantly expensive, this is the best looking virtual reality experience money can buy (currently available). The Valve’s Index is also compatible with the HTC Vive.

Another entry from the Oculus camp, the Oculus Quest is a hearty upgrade of the Oculus Go. Similar to the Rift S, the Quest also offers 6 degrees-of-freedom (DOF) and the same Oculus Touch controllers, only the Quest is completely wireless and doesn’t require a PC to run. Instead, games are downloaded right to the standalone headset’s onboard storage feature.

The Quest also slightly outweighs the Rift when it comes to resolution, offering 2,880 by 1,600 pixels compared to 2560 x 1440. This device also differs in that it is Android based, so offers a slightly different range of games.

Retailing for the same price, you can grab yourself a Quest VR Headset for $399 (on the Oculus site). While the functionalities between the Rift S and the Quest are “same same but different”, there’s nothing quite like playing wirefree. The complete freedom puts Quest a small notch higher, for us at least. (If you’ve played both, let us know in the comments below what your verdict is.)

Tap Into A Whole New World

And that concludes our list of the 5 best VR headsets in 2020. From entry level to high end, we covered the top picks currently available on the market. Whether you’re looking for high quality graphics, PC compatibility, or a smaller price point, you know where to go. At the beginning of lockdown VR headsets became a hot commodity and stocks were at their all time low, now however these items are all “back on the shelf” and waiting for you to take them somewhere exciting!