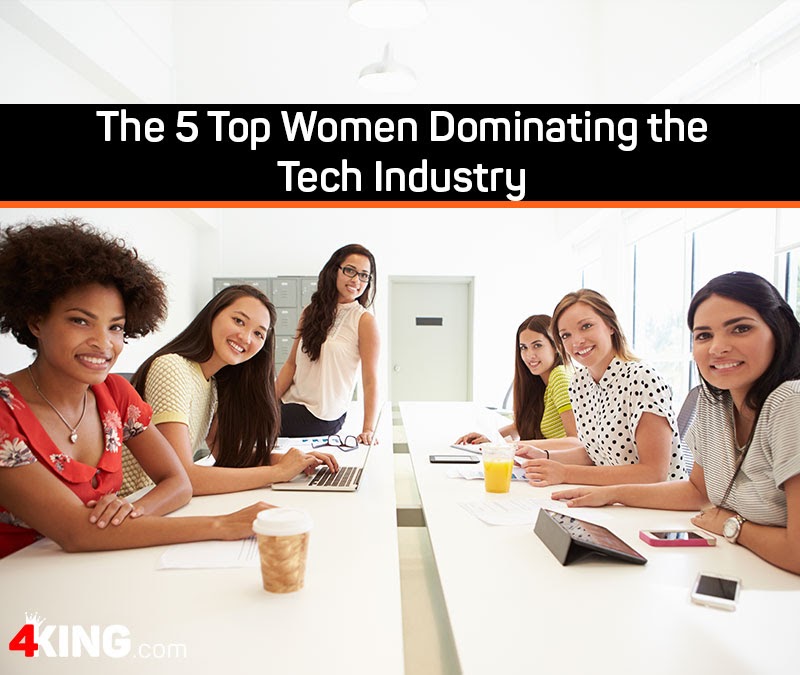 Over the last 20 years, the tech industry has entered a major boom. While the tech industry is still vastly male-centric, there are a huge number of incredible women killing the game. Unlike most tech-oriented companies, 4King is proud to have a staff made up of 50% women. That’s double the average of the rest of the industry. Now, let’s take a look at 5 women dominating in tech, which is notoriously a man’s club.

Warrior joined Cisco in 2007, after working at Motorola for 23 years. She has recently started a new job as CEO of NextEV, an electric vehicle company. In 2015, she was listed 84th on Forbes’ list of the most powerful women in the world. The Economic Times also listed her as the 11th Most Influential Global Indian back in 2015.

Ahrendts served as the CEO of Burberry from 2006 to 2014, before leaving the fashion house for Apple. In 2014, she was their highest paid exec, earning more than $70 million.

She has placed 25th on Forbes’ 2015 ranking of the most powerful women in the world, and currently sits on the United Kingdom PM’s business advisory council.

Rometty is the CEO of IBM, and also serves in the positions of Chairman and President of the company – she is the very first woman to do so. She’s worked for IBM since 1991, in various roles, but was appointed as CEO and President in 2012.

Wojcicki’s initial plan was to pursue academia, but that all changed when she developed an interest in tech. In 1999, she joined Google as their first marketing manager, and oversaw Google Video for some time.

This is when she proposed that the company acquire YouTube, which took place in 2006 and cost Google only $1.65 billion.

In February 2014, Wojcicki landed the job of CEO of YouTube. She often speaks about how important it is to balance your home and work life. Wojcicki made the list of Time’s 100 Most Influential People in 2015.

Finally on the list of 5 women dominating in Tech, is Sheryl Sandberg. Sandberg became the first woman to serve on Facebook’s board of directors in June 2012. In the same year, she also made Time’s 100 Most Influential People list. Sheryl used to be the chief of staff for the US Secretary of the Treasury, and was previously employed at Google.

She authored the book “Lean In: Women, Work, and the Will to Lead,” which looks at topics like feminism, sexism at work, and barriers to gender equality for women in the workforce. Currently, Sandberg’s reported net worth is set at over $1 billion USD.

Women in tech aren’t taking over yet

While diversity in the tech industry has come a long way, it’s by no means a free for all. Currently, only 25% of tech positions are held by women. Asian women make up 5% of that number, with Black and Hispanic women accounting for 3% and 1% respectively. Tech is still very white, and very male. Even when we look at 5 women dominating in tech, it’s clear that the diversity ratio is still growing. Go get ‘em girls!

END_OF_DOCUMENT_TOKEN_TO_BE_REPLACED

Why is VR Only Getting Bigger? A look at Virtual Reality.

The online gaming industry, and esports in particular, is growing every day. Now, Virtual Reality is on the rise too....