Bitcoin Predictions, Who Got It Right 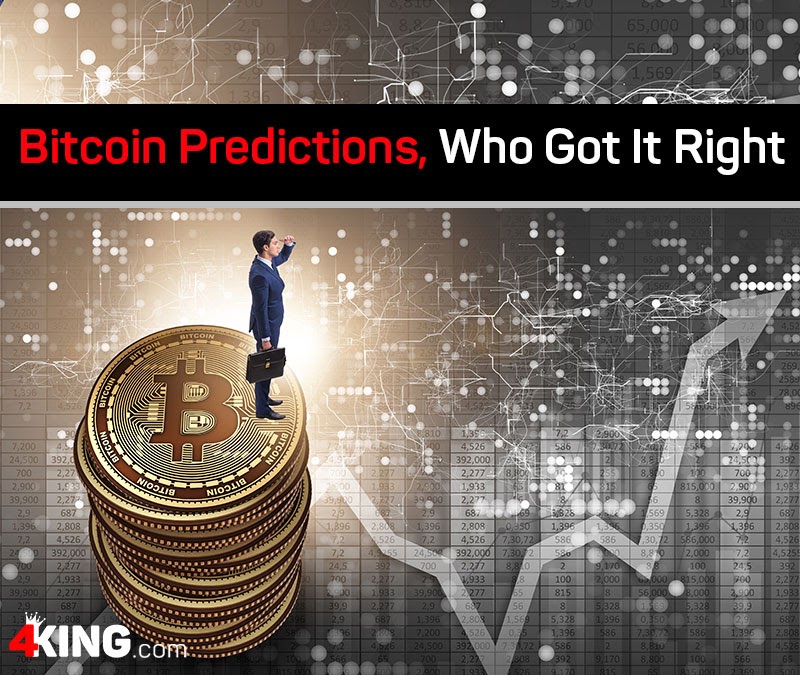 Guessing the Bitcoin price is a definite past time in the crypto industry, with many big names coming to the party with some shockingly accurate and shockingly wild predictions. Never a dull moment in this industry that’s for sure. In light of the recent surge in BTC price, we decided to take a look at some Bitcoin predictions, and conducted a small investigation into who hit the nail on the head. Here’s a look at Bitcoin predictions, and who got it right.

After being a Wall Street strategist for 25 years, Thomas Lee is now Head of Research at Fundstrat Global Advisors (as well as a co-founder). With previous positions like J.P. Morgan’s Chief Equity Strategist and Managing Director at Salomon Smith Barney, Lee is definitely worth paying attention to. He previously predicted that the Bitcoin price would hit $11,500 by mid 2018, and his prediction wasn’t terribly wrong. In March 2018, the BTC price hit $11,704 and then steadily declined for the remainder of the year. In an interesting twist, in July 2019 the price once again reached $11,500. We’ll give this one to him!

As co-founders of the Web Bot Project, Clif High and George Ure originally designed the technology and algorithms to predict stock market prices in 1997, but have since branched outside of Wall Street. The pair use the bot to predict future events based on keywords found online, and sell the information through their website. In one of Clif High’s announcements, he set the Bitcoin price to be $13,000 by March 2018. As we learnt from Thomas Lee’s prediction, that wasn’t quite how it panned out. But to be fair, he was just $1,200 off.

After also starting out as a Wall Street analyst, Ronnie Moas went on to found, and head up the research department of Standpoint Research, Inc. This Bitcoin Bull not only boldly predicted that Bitcoin would hit $28,000 in 2018, but also made an unfortunate bet on it. He promised if the OG cryptocurrency didn’t deliver, that he would make a donation of the same amount ($28,000) to FreeRoss.org (for Silk Road founder, Ross Ulbricht). This played out in a fiery Twitter battle when Vinny Lingham questioned whether the payment had been made. Long (and heated) story short: the amount was split over 5 charities and paid for by Moas, while many other investors stepped up to the plate to support Ulbricht’s organization.

Michael Novogratz’s resume reads as a who’s who of top investment initiatives, including former president of Fortress Investment Group, Partner at Goldman Sachs, even serving on the Federal Reserve Bank of New York’s Investor Advisory Committee. He is currently the CEO and founder of Galaxy Digital, an investment management company focusing on digital assets. Novogratz went in with a very bold prediction that BTC would hit $40,000 in 2018. As we’ve learnt he was way off, but all’s forgiven and he remains a prominent and well celebrated member of the crypto community.

Another former Wall Streeter and vice president of JP Morgan Chase, Tone Vays is an expert in the crypto field and offers his opinion and advice to his 95K Youtube channel subscribers. In his Twitter bio, he describes himself more formally as a derivatives trader and analyst. In an interview with CoinTelegraph last year, Tone Vays stated the case for BTC getting to $100,000 by the end of 2023. He also added that if a big enough “geo-political” event took place, the price of the OG cryptocurrency could skyrocket before then. Worth keeping your eyes on, we’ll have to see how everything unfolds.

In late 2017, the eccentric cybersecurity businessman behind McAfee anti-virus software, John McAfee, stated his case that Bitcoin would reach $1 million by the end of 2020. In typical John McAfee fashion, he went so far as to say that he will “eat his own dick” if his prediction is not fulfilled.

Sadly, he’s since changed his tune.

Running with the Bitcoin Bull Herd

Whether you’re a die hard bull or an objective bystander, Bitcoin predictions will always offer a hint of curiosity and oftentimes a strong dose of entertainment. From the more serious analysts to the eccentric advocates, there’s never a dull moment in the crypto industry. Bitcoin has seen some exciting rides this year, and it’s only going to continue. Strap yourselves in kids, it’s not over yet.

END_OF_DOCUMENT_TOKEN_TO_BE_REPLACED

How to Hack the Aging Process

Let’s be honest, aging is a truly terrifying concept. Nobody really wants to get old, although there is so much...