eSports thriving more than ever amid global COVID-19 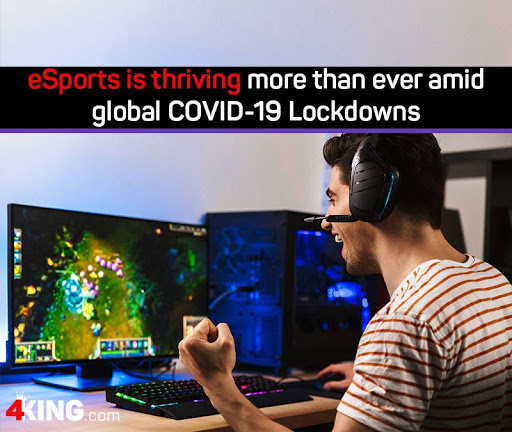 Covid-19 has hit almost every industry hard, including the sports world. The outbreak has caused the suspension of the NHL, NBA, MLB, professional football seasons, the cancellation of the NCAA March Madness tournament, and the postponement of the 2020 Olympics in Tokyo, until at least 2021. Now, with few traditional sporting options, it seems that esports is taking the driver’s seat.

How esports is filling in the gap during lockdown

Earlier in March, Formula 1 was supposed to kick off its season with the Australian Grand Prix. Instead, a McLaren team member tested positive for Covid-19, and the event was cancelled even as spectators were queuing up to get in. Instead, professional racers from F1, IndyCar, and other series, took things online, drawing fans to YouTube and Twitch.

The event took place using rFactor 2. It involved three qualifying races, and the top eight moved on to the final. The first race was made up of drivers from F1 and IndyCar, amongst others. The second was for pro esports racers like Rudy van Buren, and the third was made up of rFactor 2 players who had qualified in an event the day prior.

Obviously, there aren’t many real sporting options to bet on at the moment, so sportsbooks are having to get creative.

FanDuel, a popular sports betting site, offered its first political bets. Some of the posted bets were based on the most recent Democratic Candidate debate, and looked at whether Bernie Sanders or Joe Biden would say “coronavirus” more, or if Iraq would be brought up. However, it’s not technically legal to bet on elections in the US, so these were prop bets.

Jason Ader, a gambling industry expert, said that this period in history could prove exciting for esports and sports betting:

“The virtual sports industry is a real industry we are seeing growth in,” said Ader. “People are betting on virtual sports. It’s [a] computer playing against the computer.”

Some of the most popular esports games to bet on are League of Legends, Dota 2, World of Warcraft, and Fifa.

“I suspect this could be a moment for esports,” Ader added. “If it isn’t, it will never be.”

While there are no official figures yet, Ader estimates that esports betting is up 19% year over year. This comes in the wake of the coronavirus pandemic, so it’s no coincidence.

People turning to esports to pass the time

With more than 45 million people impacted by event cancellations, many are turning to esports to pass the time. Counter-Strike: Global Offensive (CS:GO) recently topped 1,100,000 concurrent players – that’s massive. Rainbow Six: Siege also hit a record high of concurrent players on Steam, at a little below 200,000. League of Legends servers are reportedly at 90% capacity. Basically, it’s clear that with few traditional sporting options, esports is thriving.

Esports are surging during times of COVID chaos

Despite current global circumstances, and with few traditional sporting options, esports is thriving. It’s clear that there’s a real reason behind why the world has suddenly decided to back esports – and a lot of it has to do with a sense of confinement brought on by the virus. Esports can offer a form of escape from the general mundanity of daily life, and that’s a good thing for all of us.

END_OF_DOCUMENT_TOKEN_TO_BE_REPLACED

How Covid-19 Lockdowns Around the World Have Gone.