How Much Bitcoin Do You Need To Be Rich? 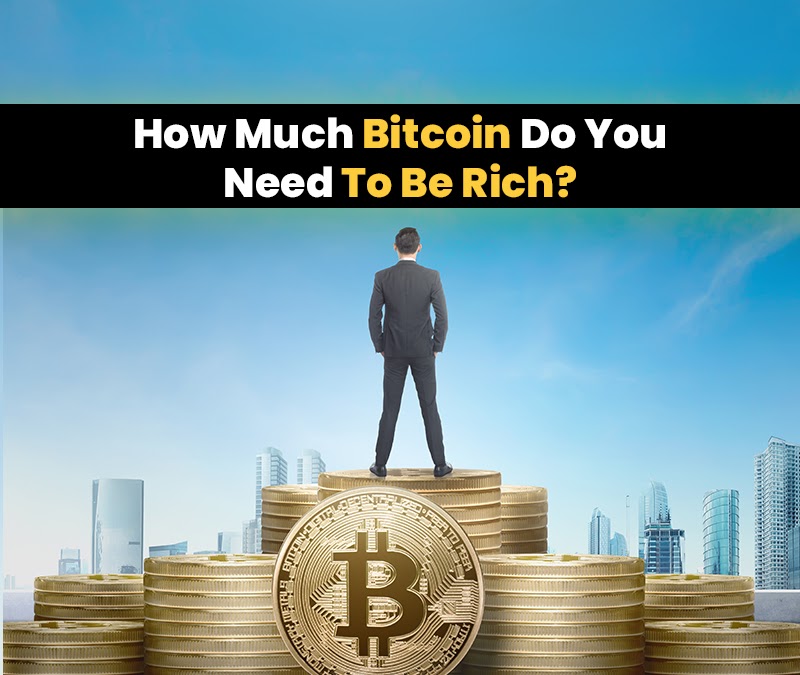 Over the past year Bitcoin has embarked on an unimaginable bull run, taking on a new status within the financial landscape, one that many are looking to get their hands on. As we pass the tipping point of adoption, many are wondering how much Bitcoin do you need to be rich? While rich is a relative number, consider that just last year it was reported that one needed only 0.28 BTC in order to be a part of the 1% of the Bitcoin Club.

Show Me The Money Maths

CoinTelegraph published an article that stated that one only needs 0.01 BTC in order to scoop up the “rich” status. Below we’re breaking it down and looking into the maths behind this. Without a doubt, and a great place to start, is the limited supply. When Bitcoin was designed in 2009 by Satoshi Nakamoto, from the beginning it was only ever destined to have 21 million Bitcoin. Putting this into perspective by looking at the Bitcoin to human ratio, there are currently 7.674 billion people on the planet, meaning only 0.003 could own 1 Bitcoin. However this will never be the case as many individuals and companies are accumulating hundreds of thousands of BTC.

Taking into consideration that each Bitcoin can be broken down into 100 million Satoshis, that leaves a pretty wide amount of opportunity for anyone to bag some Bitcoin (note not a whole Bitcoin). Satoshis create an entry into the market without breaking the bank, and there is much talk within the industry about the future buying power of a million satoshis, 0.01 BTC.

When the BTC price reaches $250,000 this could put Bitcoin centre stage as the world’s reserve currency, pushing aside the US dollar. Reiterated in CitiBank’s recent report, the bank announced that in the next 7 years the cryptocurrency could be the global currency of choice when it comes to trade. While the supply is finite, we are witnessing nearly every bank, pension fund, hedge fund and institution around the world investing in Bitcoin.

We’ve seen headline after headline of firms moving their reserves from fiat currencies to Bitcoin, acquiring tens of hundreds of Bitcoin. With a limited supply and over 18 million already in circulation (of which it is believed that 3.14 million are lost and gone forever), this cuts the chances of someone – many other someones – ever owning their own Bitcoin.

And it doesn’t stop there, it is believed that 50 million to 100 million people have also entered the Bitcoin pool, if we look at 5 – 10% of these people buying a fraction of Bitcoin, the supply is getting eaten up pretty quickly.

How To Become A Bitcoin Millionaire

Circling back to the 0.01 BTC, in ten years time when the supply is almost exhausted, it will only require 0.01 BTC in order to be considered “filthy rich”. The rationale states that if (and for the die hards “when”) Bitcoin reaches $1 million, it will reach $100 million at some stage. When that time comes, owning 0.01 BTC will make you a millionaire.

Based on the current buying momentum, all signs are signalling that Bitcoin will hit $500,000 either next year or the year after. As we continue seeing the decline in fiat currency value, and the rise of Bitcoin and cryptocurrency’s value, where does this leave the price after the last Bitcoin has been mined in 2140, or a decade after that?

How Much Bitcoin Do You Need To Be Rich?

Just 0.01 BTC apparently! Currently that costs roughly $560, is that an investment you’re willing to make in your future? Stick around for more content covering what’s happening in the crypto world, and what’s coming with this magic internet money. Destined to take over the world, there won’t be a dull moment in this corner!

END_OF_DOCUMENT_TOKEN_TO_BE_REPLACED

Bitcoin is undeniably a hot topic at the moment, especially considering it has increased in value by 912% in just...