How the U.S Is Using AI To Contribute To Warfare 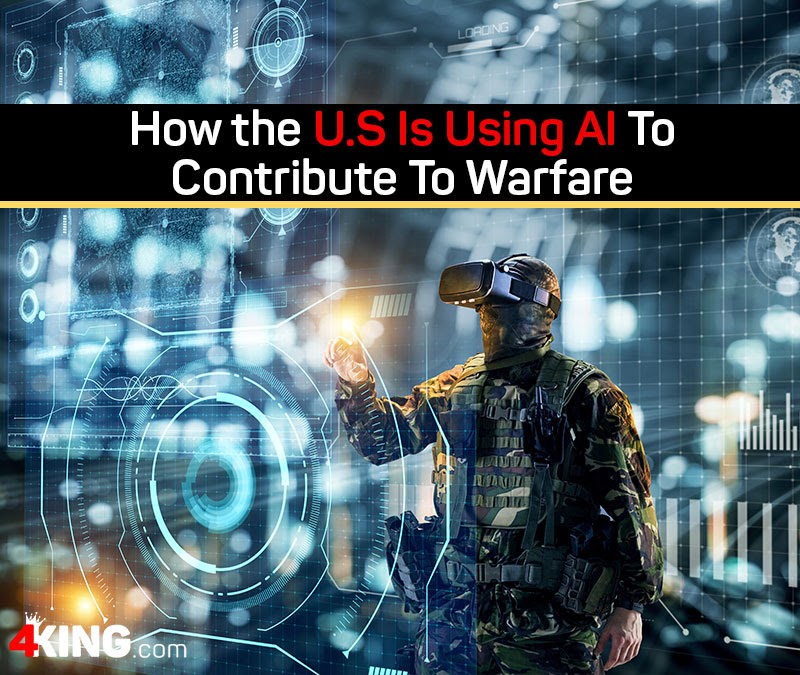 Much like the space race, technological development has become somewhat of a silent war between the world’s superpowers. In 2020, one of the technologies in question is Artificial Intelligence, which has rapidly spread to become the center of the global race for warfare supremacy. At the forefront of this race is the United States, which has increasingly weaponized AI to develop autonomous weapons systems (AWS). Here’s how the U.S is using AI to contribute to warfare. Spoiler: It’s Big Tech.

AI Is Driving Us Towards A Different Kind Of Warfare

Today’s reality is increasingly tech-driven. AI has infiltrated almost every sector of the economy and government, and the majority of the time it’s pretty helpful. However, artificial intelligence is moving us closer to a new kind of warfare – one centered on algorithmic battles, rather than taking place on the field.

The future of warfare may not include humans in any kind of active role. The weaponization of artificial intelligence means that a weapons system, activated across cyberspace, geospace, and airspace, can be far more effective than people can. AI can select human and non-human targets almost instantaneously, and attack them with the precision that humans could never dream of.

The idea of an AI system engaging in warfare may seem threatening to those who do not fully understand it. To be fair, it does seem like something a little too close to the imagination of a science fiction writer. With that being said, AI could actually reduce casualties, as it strikes with far more accuracy than people, and with greater effectiveness.

How The U.S Is Weaponizing AI

Last year, we learned that the U.S Department of Defense is using facial recognition at a massive scale. While this doesn’t necessarily sound like it’s connected to warfare, the act is a terror strike directly into the heart of something we hold dear – our privacy.

Around the same time the director of the Joint AI Center, Lieutenant General Jack Shanahan, endorsed the use of algorithmic warfare. Algorithmic warfare is based on the idea that combat will happen faster and more effectively without the human element making decisions. Shanahan noted that this style of warfare will rely heavily on AI, and he stressed the need for a stringent testing and research process before deploying it in the “field”.

Big Tech’s Role in the Weaponization of AI

We can’t truly have a conversation about how the U.S is using AI to contribute to warfare, without acknowledging the role that Big Tech has to play.

Google’s participation in Project Maven was the source of much controversy between 2017 and 2018. Project Maven, also known as the Algorithmic Warfare Cross-Function Team, is a Pentagon project that aims to develop and integrate “computer-vision algorithms needed to help military and civilian analysts encumbered by the sheer volume of full-motion video data that DoD collects every day in support of counterinsurgency and counterterrorism operations.”

The Pentagon planned to have its first algorithms installed by the end of 2017, with Google’s help. However, in an open letter addressed to CEO Sundar Pichai, 3,000 Google employees protested the company’s involvement with the project. The petition said, “We believe that Google should not be in the business of war,” before expanding on Google’s contribution to Project Maven and why it could be damaging to the brand’s public image.

The petition, published in the New York Times, argues that Google’s involvement is no less problematic because of the fact that Big Tech companies like Microsoft and Amazon are also partners.

So, does Big Tech have a spot in the race to algorithmic warfare? Unfortunately yes. But in an industry governed by greed, should we be surprised?

The U.S And Big Tech Have An Equal Role To Play

When we look at how the U.S is using AI to contribute to warfare, it’s clear that both the Department of Defense and Big Tech have an equal role to play. The partnership between Big Tech companies like Google, Amazon, and Microsoft, and the Pentagon is frightening because it means that the U.S can expand its plans to weaponize AI much faster. Without their support, the U.S really wouldn’t have much of a leg to stand on. The future of warfare is algorithmic, and we should all be concerned about it.