What to Expect From the Fortnite Update 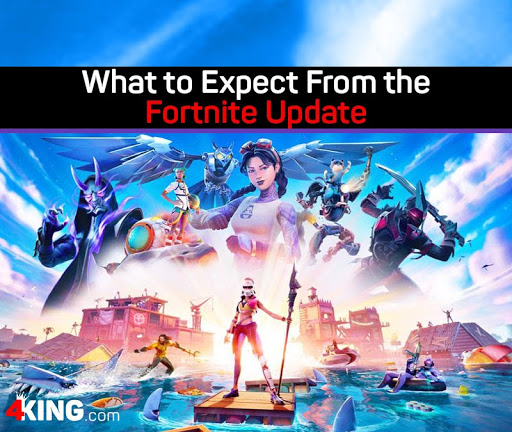 Fortnight Season 2 was supposed to come to an end on 30 April, but Epic Games extended it until 4 June. Now, Season 3 is here (as of 17 June), and there’s a lot to get into – everything’s flooded, teaser images are everywhere, and the player base is losing it. So, here’s what to expect from the Fortnite update.

The new Fortnite season has been scheduled to take place today (17 June), right after the end of Season 2. Players can still complete the Battle Pass challenges until the event.

Epic Games announced that the downtime for Fortnite Chapter 2 Season 3 will start at 2:00 ET on 17 June, but there aren’t any details as to how long it will last. Players can most likely expect there to be downtime for a few hours, while the changes are made.

It’s likely that by the time this is released, the patch will already be available to download.

Donald Mustard, the Creative Director at Epic Games, tweeted yesterday:  “Ahh. New Fortnite Season Eve. One of my very favourite days. I’m so excited for everyone to see the things we’ve all dreamed and schemed and worked on so hard for so long to Make. Things we find to be delightful and full of joy.”

Well, we’re as excited as he is – if not more so. Fortnite season 3 has been a long time coming, and it’s finally here.

What Can We Expect From Fortnite Season 3?

Epic Games has released a few teaser images, starting with the first on Monday, 15 June. It was released immediately after the Doomsday event, and is pretty much just a picture of a yellow object, poking out of water. This could be a new vehicle, object or weapon.

Why Has the Fortnite Update Taken So Long?

Epic Games warned players that today’s patch is much larger than usual, so servers will be down for longer than typical. This update was originally scheduled for 30 April, but Epic Games pushed it due to its size.

This season has been long awaited by players, and it’s finally here. While we still don’t know much about what to expect from the Fortnite update, one thing is pretty clear – everything’s flooded. Welcome to the island – check out the trailer here.

So, we’ve taken a look at what to expect from the Fortnite update. If you’ve watched the teaser you should be aware that everything is flooded and there’s a whole lot happening. Fortnite has a massive fanbase, of players from all over the world. As of 6 May 2020, it’s estimated that 350 million people play Fortnite. If you’re one of them, get yourself ready for season 3.