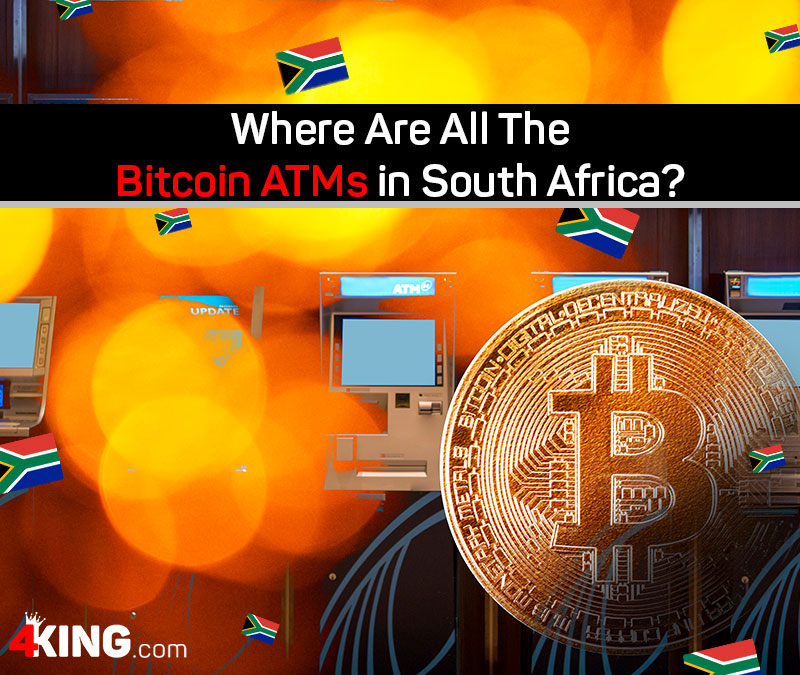 Now that you’re into Bitcoin, it’s time you knew just a little bit more. Cryptocurrencies have fast been rising in popularity in South Africa, and as more people adopt the powerful digital (age) currency, we see more Bitcoin ATMs pop up. For those new around here, we’ll get to exactly what a Bitcoin ATM is, and then we’ll cover the burning question, “where are all the Bitcoin ATMs in South Africa?”.

What Is A Bitcoin ATM?

Bitcoin ATMs run in a similar way to conventional ATMs, however (and as you might imagine) they deal with the buying and selling of Bitcoin. Not all Bitcoin ATMs offer both buying and selling, but they all allow users to buy BTC. Typically, users will need to have created a Bitcoin wallet before being allowed to do so, but this process is fast and simple and can be done on a mobile phone. Once you have a wallet, you can scan your wallet code and near-instantly buy BTC with your credit or debit card.

When Did Bitcoin ATM’s Become A Thing?

Fair question. The answer is in 2013 (4 years after Bitcoin was launched, and 2 before Ethereum to put things in perspective). The world’s first Bitcoin ATM was unveiled in Canada, followed a year later by another in the US, afterwhich the installation of Bitcoin ATMs became a real thing and started increasing rapidly.

In 2018 there were 3,500 Bitcoin ATMs spread across the world. Today, 11,500 can be counted across the globe. 87% of these crypto cash machines are located in the US and Canada, while 11% are located in Europe, 1.2% in Asia, 0.3% in South America and 0.1% in Africa.
According to CoinATMRadar, there are currently 12 Bitcoin ATMs in Africa. The website also tracks other altcoin ATMs, concluding that there are currently 11,800 crypto ATMs darted around 70 countries.

Where Are The Bitcoin ATM’s in South Africa?

South Africa currently plays host to 8 Bitcoin ATMs, spread across the 3 capitals: Johannesburg, Pretoria, Cape Town; and Durban. These ATMs can dispense R100 – R1,000,000 worth of BTC. However, you will need to provide identity verification if you are buying over R5,000 worth.

Number of Bitcoin ATMs in Johannesburg: 2

You’ll find one of them in Sandton City, allowing you to buy but not sell. While the other is located in Daratone, Bryanston, where users can buy and sell the original cryptocurrency.

Number of Bitcoin ATMs in Pretoria: 1

In Pretoria you can buy Bitcoin and Ethereum, but not sell, at the Bitcoin ATM located at Saverite Florauna.

Number of Bitcoin ATM’s in Durban: 2

Last but not least, you can buy and sell BTC and ETH at La Lucia Mall in Durban.

It appears that there used to be one in Nelspruit, but evidently that has closed.

Where are the rest of the African BTC ATM’s located?

Looking To Buy Some BTC In A Different Way?

Now that you can answer “where are all the Bitcoin ATMs in South Africa?”, before you race off to your nearest BTC ATM it’s worth noting that the ATMs can often charge higher fees and take a little bit longer to process the transaction (due to the network). Buying and selling BTC at an ATM can often incur fees ranging from 8% – 14%. Knowing what you know, it’s up to you to decide. Still, it does sound pretty cool buying BTC from an ATM. Hello the future.