Will BTC Hit R1m This Year Thanks To SA’s Elon Musk? 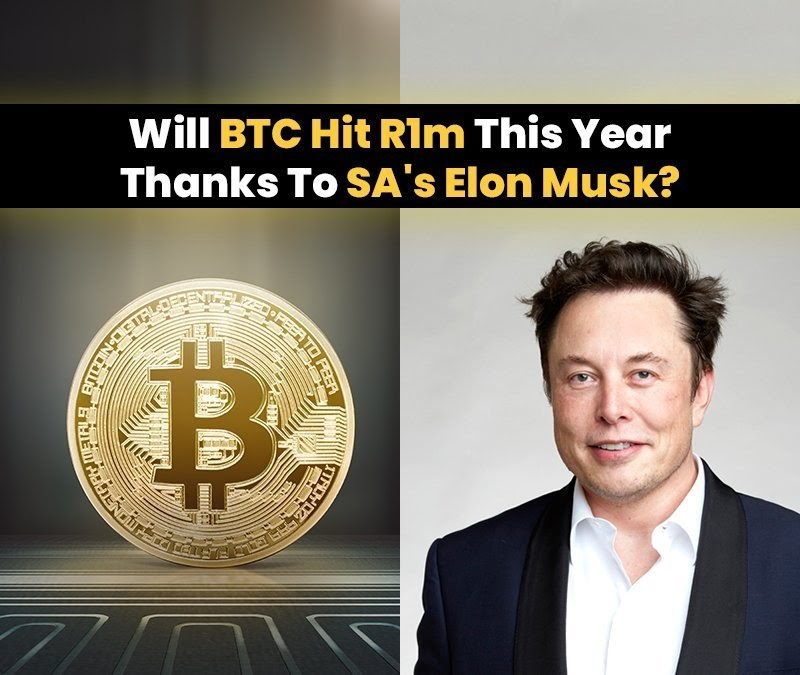 In amongst the monumental bull run we have witnessed over the past few weeks, the latest development in Bitcoin’s history involves South African Elon Musk, CEO of SpaceX and Tesla. Let’s take a look at what happened and answer the burning question on every South African’s lips: will BTC hit R1m this year?

In case you were succumbed to loadshedding and socially distancing from the internet (we get it), Monday 8 March marked a significant date in the history of Bitcoin. One of the world’s most well known companies, Tesla, reported that they had invested $1.5 billion (R22.4 billion) into Bitcoin, and would soon start accepting payments in the cryptocurrency. Over the past several months there has been a string of large corporations buying into BTC, each taking their turn to bump up the price. According to Tesla, this move is in line with their broad investment strategy that looks to diversify and maximize returns on its cash.

Elon Musk, the man behind the company, is no stranger to crypto. He regularly comments on Twitter about the crypto markets, even hyping up questionable buy-ins of Dogecoin as well as driving sales in the recent Wall Street drama that involved GameStop stocks. Musk, with his 46 million Twitter followers, is no stranger to controversy.

In 2018, Elon Musk first ran into trouble with Twitter when he announced that he had “funding secured” to take Tesla private at $420 a share. The SEC didn’t take this lightly and investigated the matter. Later, Musk and Tesla reached a settlement with the SEC which required them both to pay $20 million in fines, Musk was also asked to step down as Chairman.

As part of the settlement, a Tesla lawyer is required to approve any tweets Musk posts relating to the company (Tesla) particularly ones that have to do with earning forecasts, finances and any other relevant information. In 2019, Musk tweeted about the number of cars Tesla was expected to build that year, and again landed in hot water. The agreement was revised and Musk has since stuck to the regulations.

Fast forwarding to Monday’s mayhem, after announcing that Tesla had moved $1.5 billion of cash reserves into Bitcoin, the Bitcoin price took a run for it. Starting at a respectable $38,450 the price pushed to $43,890 before shooting up to $48,000 – a new record high for the cryptocurrency – by 9 February. This equates to a 24% increase in just 24 hours, another first for the cryptocurrency. At the time of writing the price had corrected to $46,000.

According to Craig Erlam, the senior market analyst at OANDA Europe, “Bitcoin could soon be eyeing $50,000 on the back of the Tesla news.” Erlam went on to add that Musk is clearly putting Tesla’s money where his mouth is, commenting that it will prove to be more impactful in the long run. Reflecting on the move, Erlam stated that “A company investing that level of money, in particular, very much adds to the validation of it as an investable asset.”

Will BTC Hit R1m This Year?

While BTC teters on $46,000 this equates to roughly R680,000. For Bitcoin to hit R1m this year, the price would need to increase by 32%. Considering that we are only in the early stages of the second month, it does not seem impossible nor unreasonable to imagine that Bitcoin could gain 32% in the next 10 and a half months. Especially considering it shot up 24% in just 24 hours. This would equate BTC to be trading at $67,682, not implausible.

Time To Buy Or Time To Sell?

If you haven’t got in already is it too late? Never. As the cryptocurrency continues to gain momentum, the world takes notice. And as the world takes notice, more retail investors enter the market, and more institutional investors enter the market, and the higher the value of Bitcoin becomes. If you’re on the fence over whether to buy Bitcoin, consider this incredible move from Tesla, and the market’s incredible reaction. The question is not will BTC hit R1m this year thanks to SA’s Elon Musk, the question is will you be part of the ride?

END_OF_DOCUMENT_TOKEN_TO_BE_REPLACED

Can Bitcoin Be Hacked?

Bitcoin is a decentralized digital currency and blockchain, which harnesses cryptography to ensure the security of transactions. Bitcoin transactions are...