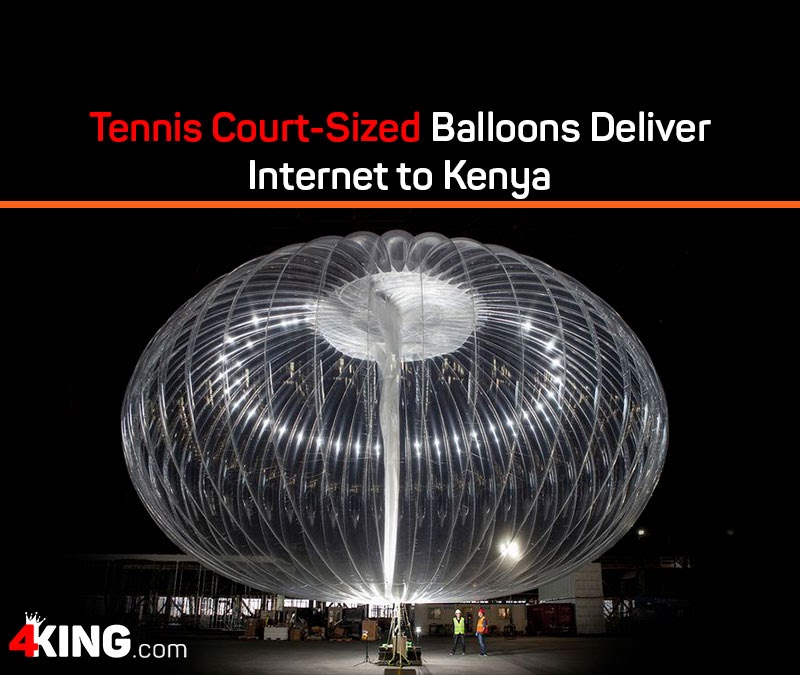 3.8 billion people around the world are unable to access the internet, but that could change dramatically very soon. Google’s Project Loon is bringing internet connectivity to the world from just 12 miles into the stratosphere, via massive balloons. Loon recently announced that they’ll be launching tennis court-sized balloons to deliver internet to Kenya, ranging over 20,000 square miles of the country’s vast landscape. Already more than 35,000 Kenyan citizens have connected to the internet via a Loon balloon, which can be used for voice and video calling, internet connectivity, and streaming.

“As our balloons, or flight vehicles as we call them, float on stratospheric winds, they work together to provide coverage to areas below,” Loon’s CEO Alastair Westgarth said. “Depending on their position, a flight vehicle can alternate between actively serving users, operating as a feeder link in our mesh network to beam the internet to other vehicles, or repositioning itself to get back to the service region. Still other flight vehicles can be staged nearby (in stratospheric terms), waiting to enter the service region where they can begin providing connectivity.”

Connecting the balloons is one form of technology we’re all too familiar with at 4King – Artificial Intelligence.

The balloons use AI to teach themselves how to navigate over the landscape and where they need to go. In early tests, they essentially just went where the wind took them, but now Loon’s machine learning algorithm has formed a navigation system that has taught the balloons how to ascend and descend to pick up the best winds for peak coverage.

“Rather than fight against the wind at one altitude, the balloon moves up or down until it finds a favorable wind current,” Loon CTO Salvatore Candido wrote in a Medium article. “By repeating this thousands of times over the lifespan of a balloon, we can drift on the winds to get to locations around the world.”

How Accessible is Loon?

Loon balloons can be launched every 30 minutes, so coverage can be maximized in a very short period of time. Each balloon will stay airborne for 100 days before it needs to land, and can bring internet connectivity to more than 4000 square miles – that’s 200x the square mileage of a cell tower. The balloons are charged via solar panels, and users can connect to them with an LTE mobile device.

Once it’s flight is over, the balloons automatically release parachutes which bring them to the ground so they can be refurbished.

The internet service they provide is fast too. Upload speed sits at just below 5 mb/s while their download speed can reach 19 mb/s. Their latency is solid too – reaching 19 milliseconds recently.

This deployment of Loon balloons in Kenya is the first non-emergency use of the technology so far. They were otherwise deployed during natural disasters, which rendered earth-bound web service options unavailable. Last year, Loon balloons provided internet connectivity in Peru, only two days after a particularly disastrous earthquake. They also brought web service to Puerto Rico after Hurricane Maria in 2017.

According to Alphabet, Google’s parent company, these tennis court-sized balloons will deliver internet to Kenya, and can connect the forgotten billions who lack internet connectivity to the world wide web.

Loon is vastly less pricey to run than Elon Musk’s SpaceX projects, which would see internet connectivity coming from satellites 340 miles into space.

Why is Loon Being Deployed in Kenya?

Some experts have criticised Loon’s decision to deploy the balloons in Kenya, citing the fact that the country already has most of its citizens connected to the internet. Roughly 39 million out of 48 million citizens have internet connection in Kenya, vastly more than in many other developing countries.

However, Loon’s leaders said that they made the decision to launch in Kenya as the country had a reputation as being open to adopting innovative and new technologies.

“Kenya is an ideal place for us to begin this new era of stratospheric communications,” Westgarth said. “The country has been incredibly innovative about finding new ways to connect unconnected populations. As a new, innovative technology, this is a great fit.”

Kenya is the ideal testing ground for further expansion into Africa, where only 28% of the 1.3 billion people living on the continent have consistent internet access. Furthermore, internet connectivity costs are incredibly high in the continent, which makes it inaccessible within poorer communities.

Kenyan authorities believe that the Loon balloons will enable the country to maintain its reputation as a leader in technological innovation, and further expand internet usage in remote towns in the country.

Loon’s tennis court-sized balloons will deliver internet to Kenya, a country which already has more than 39 million people out of its 48 million-strong population online. However, Loon maintains that Kenya is the ideal testing ground for this project, thanks to the country’s openness to new technology. Loon balloons utilize AI and machine learning to navigate wind currents, to better provide those on the ground with internet connectivity. These balloons don’t provide slow coverage either – the upload speeds can reach a 5 mb/s and download speeds sit at around 19 mb/s. That’s not half bad. Either way, this project could bring solid internet connectivity to even the most remote corners of the globe – advancing us all and bringing the world wide web to 3.8 billion un-connected people.