What Are NFTs And Why Are They So Popular 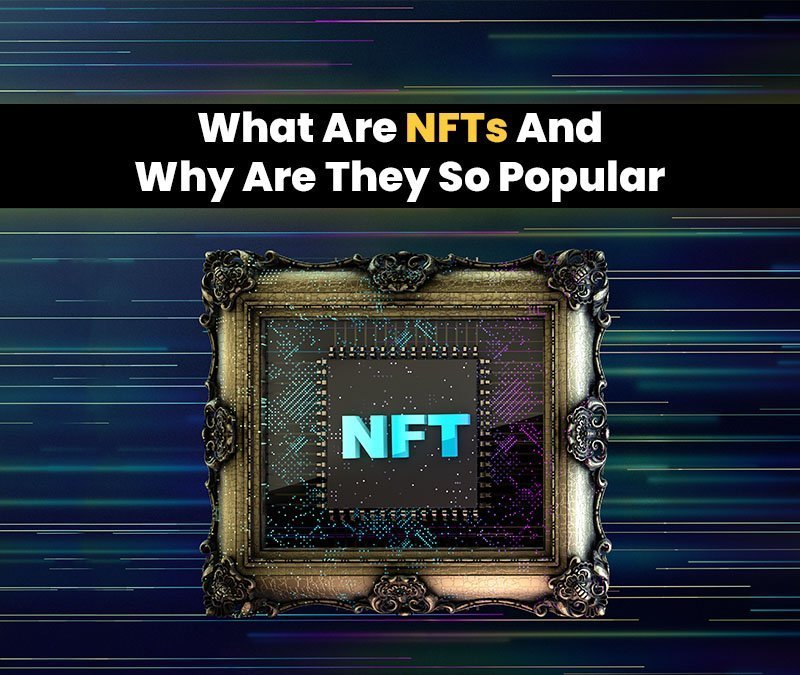 NFTs are a hot topic both within and outside of the crypto industry at the moment. Making many mainstream media headlines, it’s hard not to come across one article or another talking about them. Here we’re going to get you up to speed with what are NFTs, and also fill you in on why you’re seeing them everywhere. Whether you’re a crypto fanatic or not, this is one you can’t miss.

Simply put Non Fungible Tokens are one of a kind digital assets. While cryptocurrencies created a modern take on money with digital currencies, NFTs are the modern answer to collectables. Let’s break that down. Being non fungible means that the asset cannot be used interchangeably and instead holds unique properties. Money for example is fungible, allowing it to be used interchangeably for anything by anyone. These one of a kind assets can represent anything from a house, to a designer bag, to a painting, and act as certificates of ownership for these physical – or virtual – assets. While art can be duplicated, the NFT represents ownership of the “original”, similar to an autographed painting.

Making use of blockchain technology, these assets then lay an ownership claim in a public ledger that is entirely immutable. Taking collectables one step further, NFTs can also carry smart contracts that give the artist a cut of any future sales. If only Taylor Swift could have linked her early music to NFTs we could have saved months (years) of Scooter Braun drama.

Why Are NFTs So Popular Nowadays

In recent months there have been some high profile NFT sales, raking in millions of dollars (and an equally large amount of disbelief). In February an animated GIF of a Nyan Cat sold for over $500,000. In March, Canadian musician (and current beau of Elon Musk) Grimes made over $6 million selling some of her digital art. And then Twitter and Square founder, Jack Dorsey entered the ring, auctioning off his first ever tweet. For the current bidding price of $2.5 million, the lucky highest bidder will receive a certificate that is digitally signed and verified by Dorsey and the metadata of the original tweet.

The most recent sale that catapulted NFTs into large scale mainstream media is an NFT by a digital artist by the name of Beeple. His piece of digital art sold for a whopping $69 million. The story behind it has a little more depth: each day for the last 5,000 days Beeple (aka Mike Winkelmann) has created a fresh piece of digital art and this one was a collection of the first 5,000 days – that’s 13 years worth of digital art created daily. According to Christies, a record 22 million people watched the auction’s live stream final moments.

The last Picasso painting sold for $115 million in 2018. I’m just going to leave that there.

Why Are NFTs Valuable?

The general consensus is that they aren’t and many argue that it’s just a bubble. According to crypto investor and Youtuber, CryptoStache, NFTs have a lot of value. When it comes to art, there is value in holding the original. NFTs represent not only the “original” but also as it is based on blockchain, it holds all the history of who previously owned it. CryptoStache adds that NFTs also reduce counterfeits, as if there is no historical data on the token it’s a forgery. Essentially, when it comes to art NFT it isn’t about viewership, it’s about verifiable ownership and the fact that they can’t be forged.

Other areas that are exploring the use of NFTs is the luxury goods industry. Louis Vuitton Moët Hennessy (LVMH) is leading the game by exploring incorporating blockchain technology in their luxury goods sector. By using NFTs the brand can “provide proof of the authenticity of luxury items both to the customer and for internal use at LVMH”. Going one step further the technology will also allow buyers to see where each raw material came from effectively creating a digital timeline of how and when the product was made. This not only creates a more desirable (and interesting) product, but also clamps down on counterfeit goods.

To NFT Or Not To NFT

This either sounds like something that excites you, or the complete opposite. If you are interested in getting into the NFT market, which has grown to a sizable $250 million market by the way, you can head to online stores like Rarible and Mintable. Both these marketplaces offer large selections of digital collectables where unique, scarce and valuable NFTs can sell for anything from 2 ETH to 168 ETH ($300,000). Now that we’ve covered everything from what are NFTs to why they’re wildly popular, one thing is for sure: NFTs have firmly taken centre stage after Bitcoin’s wild bull run and are currently attracting all the attention.

END_OF_DOCUMENT_TOKEN_TO_BE_REPLACED

How to Buy Bitcoin in Vietnam in 2021

While the use of cryptocurrencies is banned in Vietnam, the number of searches for how to buy Bitcoin in Vietnam...